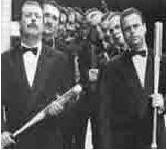 Stephen Timms, the financial secretary to the Treasury, has told the Commons that there have been 11,266 security breaches at HMRC since it was formed in 2005.

The breaches, according to Timms, cover "a wide range" including; unlocked cupboards, losses, theft, suspicious behaviour and vandalism.

I guess this one was on the list as well?

"Did you hear the one about the lady who attended a Data Security Workshop held at an HMRC building?

Apparently sitting through both the morning afternoon sessions, and enjoying the departmental coffee and sandwiches, she obviously found it all to be a worthwhile exercise.

The fact that she was actually a member of the public, who had mistakenly wandered in to the building, only came to light when the facilitator asked everyone present to hold up their Data Security booklet, and of course the lady had to admit that she hadn't actually been given one.

You couldn't make it up."

HMRC Is Shite (www.hmrcisshite.com), also available via the domain www.hmrconline.com, is brought to you by www.kenfrost.com "The Living Brand"
Posted by Ken Frost at 10:53