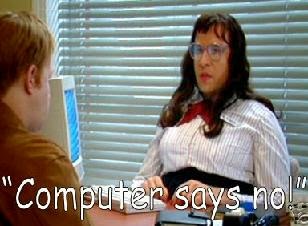 It seems that HMRC is having a wee spot of bother wrt fining taxpayers for late VAT submissions, as in 2013 around 49% of appeals (8,000 cases) on automatic fines were successful.

UHY Hacker Young, which conducted the research into the incorrect fines, claimed that the computer based system used by HMRC was issuing fines for late submissions, regardless of circumstances.

Simon Newark, a partner at UHY Hacker Young, is quoted in economia noting that the onus on the taxpayer to prove his/her innocence does not go down well with the taxpayers:


“That’s perceived by taxpayers as being unfair, but unfortunately, that’s what the law says.

In a lot of borderline review cases HMRC is rubber-stamping the automatic penalty.

Taxpayers should be allowed to explain their situation first before they are railroaded into a system of fines and penalties.”

However, HMRC is of the view that the system is “working well.”


"Statutory penalties are sent out when a return or payment is late. Late receipt is a fact that triggers the penalty but of course we accept there can be valid reasons for being late and the taxpayer simply has to show they had a reasonable excuse for submitting late.

This shows the system working well."

Wouldn't it save time and effort to check the reason for the late payment first, before automatically issuing fines?

Actually, no it wouldn't, because HMRC is aiming for maximum automation and minimum staffing levels.

Good luck to all if HMRC is allowed to raid bank accounts for unpaid tax!

HMRC Is Shite (www.hmrcisshite.com), also available via the domain www.hmrconline.com, is brought to you by www.kenfrost.com "The Living Brand"
Posted by Ken Frost at 09:14