Guilty Until Proven Innocent - Concentrix Makes Up For Lost Time 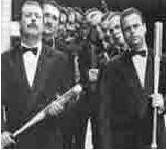 On Sunday I noted that Accountancy Age, on the very same day as my article about Dearnley, wrote about outsourced tax credit Concentrix staff in Belfast being paid millions (approx £72M) to do nothing for three months as a result of a systemic HMRC IT failure.

Concentrix were tasked with checking up on erroneous or fraudulent UK working tax credit payments.

Clearly worried over the time wasted, Concentrix are now applying themselves with gusto to the task and have gone for a spot of fishing. As per the Independent:


"When Mary Folwell got a letter from HM Revenue & Customs last month, she put it to one side assuming it was just a standard reminder that her tax credits would be renewed.
When she got round to opening it, she had a shock. It was actually from an HMRC-appointed agency named Concentrix – and it accused her of living with someone and threatened that unless she could prove otherwise, her tax credits would be stopped within 30 days.

"It said they had evidence to suggest that I was living with someone, which sent me off into panic mode," Mary, a 55-year- old pre-school teacher in Bristol, told me. "I separated from my husband two years earlier and had moved into a small flat on my own. There really has never been anyone else here."

The letter threatened that if Concentrix did not hear from her by 24 February, "we will stop your tax credit". "I only get £15 a week," explained Mary – "which may not seem much but it's crucial to my budget. If I lost that money, I would really struggle."

She's not alone. Tens of thousands of people – mainly single mothers, it seems – have been targeted with similarly bullying letters. The letters are not only frightening, but their demands are needlessly onerous. In short they demand that people supply almost all their personal details to prove some spurious suspicions that HMRC may have. Failure to do so within a couple of weeks means losing out on essential cash for which they are eligible."

This is corroborated by a loyal reader, who commented yesterday regarding postal delays:


"......and better.......have heard that working tax credit disputed overpayments post is so far behind that they are starting to send out "shortened" response letters not explaining anything but just telling the taxpayer to pay up.

Low hanging fruit are the easiest to pick, especially when using the tactic of guilty until proven innocent!

HMRC Is Shite (www.hmrcisshite.com), also available via the domain www.hmrconline.com, is brought to you by www.kenfrost.com "The Living Brand"
Posted by Ken Frost at 10:04