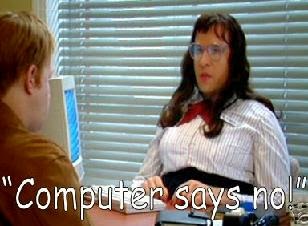 My thanks to the loyal reader who penned this most excellent analysis about Dearnley and the "binary revolution" in HMRC:


"Dearnley is a probably being economical with the actualité like so many members of HMRC’s Ex Com.

The constant shouting of the word 'Digital' to describe their IT strategy should immediately ring alarm bells since by their very nature all the Departments computers have been digital (ie using binary compiled code) since the date the Inland Revenue bought their very first LEO machine second hand from Joe Lyons in the 1960s. As a consequence the Revenue could claim to have digitised most of its work decades ago. It would be nice to see such obvious bullshit occasionally challenged at places like PAC.

More seriously, while Dearnley frequently likes to boast about his speedy roll out of Windows 7 to all HMRC desktops he negelects to mention that in the process it has broken loads of applications, created many problems and generated thousands of lost man hours of work

With regard to the problem of 'legacy' systems Dearnley seems to fail to understand or deliberately ignores the basic issue that all IT applications fall into that category the moment they hit the live metal and start running in anger. It does not matter whether they are 5 minutes old or 5 years old they all have to be maintained and they all face the issue that the software and hardware on which they were designed and run is sooner or later out of date. Moreover, political events and changes to legislation will mean the functionality is going to have to be constantly updated and enhanced.

It is certainly true that HMRC over the years has wound up with a huge IT estate running a wide range of different platforms, operating systems and applications. However, the people largely responsible for that situation are not the Revenues IT suppliers but the Board of HMRC itself, including individual like Dearnley and Pavitt who have constantly changed the core IT strategy. For example, a few years ago the mantra coming out of Ex Com was that HMRC was to buy not build its software so they invested massively in various proprietary COTS packages, many of which were costly and often incompatible with the Revenues needs so had to be expensively customised. Now the pendulum has swung completely the opposite way and HMRC now are betting the whole shooting match on Open Source systems and bespoke applications written in house. That punt may come off but it is a very high risk strategy particularly as much of the software being used is largely untried and unproven for running major government systems and the in house HMRC 'Digital' Teams in Newcastle and elsewhere have no experience of delivering and supporting systems on that scale. In addition, there is the very real worry that Dearnley appears to be funding his ambitions by stripping out investment in maintaining and supporting the existing legacy estate which still runs 99% of HMRC systems. If his grand schemes come to nothing then the Revenue could end up with the worst of all worlds with new systems not fit for purpose and old applications needing costly large scale upgrades to keep them running.

The suspicion is that Dearnley who spent a mere three years at Vodafone before cutting and running to HMRC in 2013 will do exactly the same thing to the Revenue when his contract expires in 2016. Unfortunately, by then HMRC may find its IT has been well and truly scuppered."

Ironically Accountancy Age, on the very same day as my article about Dearnley, wrote about outsourced tax credit Concentrix staff in Belfast being paid millions (approx £72M) to do nothing for three months as a result of a systemic HMRC IT failure.

Let us trust that Dearnley (if he is actually competent) doesn't regard this as merely a two/three year stepping stone role on his career path.

HMRC Is Shite (www.hmrcisshite.com), also available via the domain www.hmrconline.com, is brought to you by www.kenfrost.com "The Living Brand"
Posted by Ken Frost at 10:24