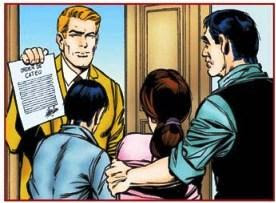 My sympathies to the lorry drivers apparently stung by this scam.

As per the BBC:


"More than 1,000 lorry drivers have been left owing large sums of tax after claims the accounting company they used disappeared with the money.

They say they were encouraged by agencies to set up as limited companies and use the services of the now-defunct Lincoln-based firm Think Accounting.

An HMRC inquiry is under way after drivers were hit with unpaid tax bills.

Company owners Lee Wilson and Symon Williams Cooke did not respond to BBC requests for a comment.

It is alleged the pair, who were not qualified accountants, worked with HGV driving agencies, paying agency staff commission if they encouraged the drivers to set up as limited companies with Think Accounting.
These limited companies and the tax they were liable for were administered by the firm on the drivers' behalf.

Drivers were given a small weekly wage plus expenses and dividends and say they believed the firm was paying the correct level of tax owed.

One of the affected drivers, Ian Hannon, said he received a tax bill for £11,500 after dealings with the company.

"My national insurance, my corporation tax, my VAT - Think Accounting had not forwarded anything on to the relevant parties to the tune of £11,500."

The company operated from 2011 to 2016, first as Think Accounting, then New Wave Accounting and finally Igloo Accounting, all of which have since ceased trading.

Problems came to light when driver Ron Tierney from Barnsley posted about his experiences on an online forum used by truckers.

"I put on had anyone been a victim of Think and I had 4,500 replies off other truckers in the same position," he said.

"I brushed it under the carpet. I didn't want to tell my wife, my family. I was expecting bailiffs to knock at the front door."
The drivers were directed to another accountant who reported concerns to the police. The investigation was then passed on to HMRC.

Accountant Nic Davison, who has worked with some of the affected drivers, said: "HMRC should have put a stop to it straight away, but what they are doing is prosecuting the people that can't defend themselves."

HMRC urged people to be clear what they were signing up to.

It said anyone who could not pay their tax debts should contact them."