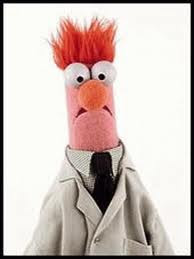 I am pleased to see that it is not just this site, and its loyal readers, who can see that Danny "Beaker" Alexander was bullshitting when he claimed that HMRC would recruit an extra 2,000 or so tax inspectors for the new Effluent....sorry...I mean Affluent Unit.

Unsurprisingly, I am still waiting for him to answer my Tweet to him about it...I won't hold my breath!

Here is the FT article in full:

"Conference platforms can turn even quite decent ministers into smoke-and-mirrors artistes. Take those press reports from the Lib Dem conference in Birmingham about HM Revenue & Customs recruiting thousands of staff to launch a crackdown on the rich. “Extra inspectors recruited to target wealthy tax avoiders,” proclaimed the Independent. Under the banner “Soak the Rich!” the Daily Mail reported that Treasury chief secretary Danny Alexander was “recruiting a team of 2,250 tax inspectors to launch raids on the wealthy”. I trust Notebook readers were not taken in.

Well you didn’t think that the auburn-haired Mr Alexander meant that extra people were being recruited did you?

Surely you were savvy enough to spot the weasel words?

What the minister said was that “an additional 2,250 staff will move into new anti-evasion and avoidance jobs”.

In plain English, existing HMRC staff will move from their present jobs to work on tax evasion by the rich in a new “affluent” unit. Mr Alexander told the Lib Dems that “this month over 1,000 of these jobs are being advertised”. And so they are – all of them internally. (No, I wouldn’t dream of describing him as Duplicitous Danny. He is just dexterous with words.) Meanwhile, the cull of HMRC staff from the present 66,000 to 56,000 in 2014/15 continues.

HMRC insiders are cynical about the whole exercise. “It takes four years to train a tax inspector,” says one. “You can’t just whistle ’em up. And you’d need the best ones – senior civil servants – to tackle rich people who hire top accountants to advise them how to avoid tax legally.

“The risk is that by taking staff away from chasing ordinary people, who provide the bulk of tax revenue, the Exchequer will lose out. It’ll be interesting to see if the numbers will really add up.”

HMRC’s new “affluent unit”, whose old staffers will concentrate on the 350,000 people earning more than £150,000, has been told to bring in an extra £560m for the Exchequer by 2014/15. That will be election year. The punters will not want any tricksy interpretations of the word “extra”."