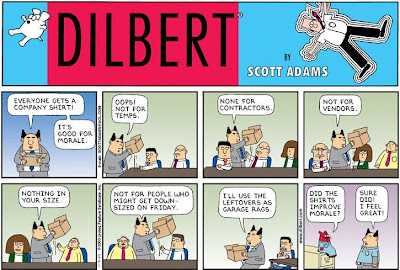 In November of 2007 HMRC conducted a staff survey, to find out their views and attitudes towards the organisation that they should be proud to work for.

20062 members of staff (63%) responded, the results make grim reading for the senior management of HMRC and the government; morale is sinking fast. One response particularly stands out, 30% of staff of HMRC did not know that the role of HMRC was to administer the UK's tax and customs system.

What is HMRC for then?

The full results can be accessed here. However, here are a few highlights:

A truly dismal set of findings, one that HMRC and the government should be very ashamed of and worried about.

The question is, are the government and senior management of HMRC able and willing to improve the situation?

HMRC Is Shite (www.hmrcisshite.com) is brought to you by www.kenfrost.com "The Living Brand"
Posted by Ken Frost at 17:17