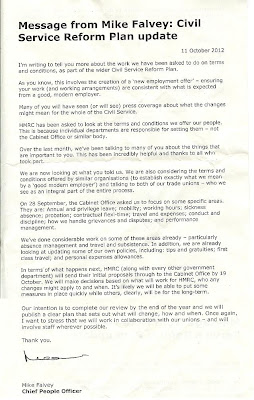 Last week the Guardian published an article about leaked documents that detail plans to change the working conditions of the country's 450,000 public sector employees (including those who work for HMRC).

HMRC was quick to react and a day later Mike Falvey, Chief People Officer (a rather clumsy title), wrote a response which a kind loyal reader sent me and which I have attached above. HMRC will send its proposals to the Cabinet Office by 19 October.

By happenstance I am advised that around 500 or so Admin Assistant grade (the bottom grade) employees have been promoted by one grade to Assistant Officers.

I understand that they were picked by their managers and all they had to do was say yes, not a form in sight.  This of course has upset some who previously had to work very hard producing a CV of competences and be interviewed to get the same result, some very recently.

The promotions, although first mentioned to staff at the end of the July, occurred around the time of the staff surveys on Friday 28th September.