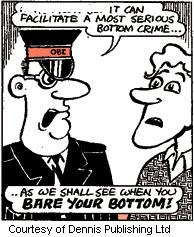 The nature and definition of a "reasonable excuse" wrt tax issues has been highlighted by Geraint Jones QC (who oversaw 4 hearings into late payment penalties imposed by HMRC).

Accountancy Age reports that he found in favour of 3 cases:

He relied on a European Court of Human Rights ruling that stated the penalties imposed by HMRC were "in the nature of a criminal penalty".

As such, he said HMRC must "satisfy me to the criminal standard" – beyond reasonable doubt – that it was an unreasonable mistake on the taxpayer's behalf that filing did not take place.

"HMRC argues that a 'reasonable excuse' must be some exceptional circumstance which prevented timeous filing.

That, as a matter of law, is wrong.

If Parliament had intended to say that the penalty would not be due only in exceptional circumstances, it would have said so in those terms."

However, he didn't stop there in admonishing HMRC. He also noted that HMRC, by imposing a second penalty while deliberately failing to send reminder about the first penalty, was trying to take advantage of its own default.

"In my judgment, it is not open to HMRC to take advantage of its own default in sending a timeous default notice to a taxpayer.

That would offend the common law principle of fairness and most right-thinking members of the public would find it repugnant, especially on the part of a public body."

As noted before on this site, the trust between HMRC and the taxpayer has broken down. HMRC by acting in this "repugnant" fashion, by trying to profit from its own failings in communications, has further undermined its reputation with the taxpayers.

A public body, and the state, can only function in a democracy if the voters/taxpayers have a degree of trust in that body. When that trust breaks down the state, public body or democracy will be swept away.