Putting Things Right - Where Is The Justice? 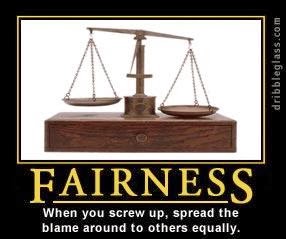 My thanks to a loyal reader who gave me permission to publish a letter that she sent to:

To add insult to injury, having emailed Cameron two weeks ago about the situation, her email was answered by HMRC telling her to raise the matter with the Adjudicator.

Here is the text of her letter, with locations edited out in order to protect her identity.

"Just over 3 years ago my daughter and I fled the controlling clutches of her Police Sergeant father in **** to the edge of *******.

Together with HMRC, he had made life so difficult for us we had no choice other to leave our family home and start a new life hundreds of miles away where the only person I knew was my father.  3 years later and with my daughter now 6 years old life is very pleasant and the battles between her father and me have been resolved, but not without years of heartache, distress, solicitors and tribunals caused by my daughter’s father and the actions of HMRC.

I am writing this letter because, despite having unfinished business with HMRC in waiting for their apology, it has become clear that I am not the only person to have part of my life destroyed.  Because HMRC is attempting to cost cut and in doing so is destroying families and driving them to despair, with their decisions made wholly to save money.

The 250 mile move has led me to another mother suffering the same at the hands of her controlling police officer ex partner in ****.  HMRC’s award of Child Benefit and Tax credits to the high earning officer, over the part time minimum wage mother, is confirmation of my suspicions that this is a cost saving exercise for HMRC.  I battled HMRC for over 2 years to prove they were wrong in their decision, which they made on this basis.

A tribunal took 5 minutes to agree with me WHILST THE HRMC REPRESENTATIVE AGREED WITH THE JUDGE MUMBLING ‘I’M NOT SURE WHY WE’RE HERE!!!!!’  Hell and my life destroyed, leaving our friends and family, the village I grew up in, our home (previously MY grandparents), filling each day with letters and evidence gathering day after day for 2 years whilst struggling as a single mother, ink, paper, postage, photocopying, telephone calls mounting on my credit card bill, overdraft, interest, frustrated telephone calls to a call centre, being misinformed by HMRC staff, constantly being told that my call couldn’t be escalated to any senior person, hours trying to entertain my 3 year old daughter whilst dealing with paperwork and making phone calls, time and money lost in travelling to tribunals, my daughter’s first trick or treating missed, the list goes on………to hear those sorry words from HRMC ‘I’m not sure why we’re here’.  I want to scream as I write this remembering the torture and pain I was going through.

Nearly two 2 years later, and having won my tribunal against HMRC, they should have put things right as they advocate in their ‘Putting Things Right’ leaflet.  Seeing my whole situation playing out in the new town I have moved to, with another set of parents shows I am not a ‘one off’.  HMRC have learnt nothing and continue to make things wrong, far from putting things right.  Somebody needs to take control of this situation.

My e-mail to 10 Downing Street 2 weeks ago, highlighting the waiting time for the adjudicator, was UNBELIEVABLY responded to by HMRC telling me that I needed to direct my enquiry to the adjudicator.  What an ABSOLUTE joke and a course of action which I am utterly disgusted with.  Mr Cameron you have let me down and there are many more people suffering too whist this is being ignored.

Can somebody please help us?"