Homer Admits She Gets Paid a Lot 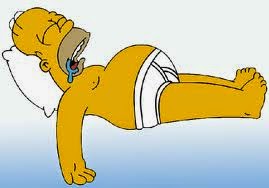 Around mid July Lin Homer was asked about her £20K bonus, she said that she should keep it as it reflected “a very good performance”.

Unsurprisingly, given that some HMRC staff do not receive basic pay that amounts to £20K per annum, the issue was raised at a recent HMRC Hotseat Q&A on the intranet.

My thanks to a loyal reader who passed on a transcript of the relevant part:

Can you please tell everyone how you think you can justify the £20,000 bonus that is widely reported in today's media?

This is when all my colleagues have had to put up with either a 1% or no increase on their wages in the last few years that in real money equates to a wage decrease. The bonus you are receiving is actually more than an AA or AO grades salary!

I look forward as does everyone else to your response.
Anon

Thank you for your question. I know that pay is a really important issue for you at the moment so I’m happy to explain the position on SCS pay, which is handled differently to AA to G6 pay.

Some years ago, a pot of about 9 per cent was created by putting some of SCS base pay into a non-consolidated pot, which was then awarded only to top and achieved performers.

This Government decided to freeze all but a third of that pot and only makes awards to top performers. These awards continue to be distributed.

I should stress that pay and performance management for senior civil servants are handled centrally by the Cabinet Office. In the case of Permanent Secretaries, a remuneration committee – with an independent chair – recommends whether to pay an award and the amount, after considering a wide range of feedback and evidence.

During my time as a SCS, in line with that process, I have been awarded a bonus on a number of occasions and not on others. This is based on evidence and a comparative analysis across all Permanent Secretaries. The decision is reported our Annual Report, and it’s this that prompted the Telegraph piece.

On my visits to our offices and at events many of you tell me the public sector pay cap is making things tough for you financially. I understand why my performance award has generated some strong feelings as I do get paid a lot."

You will observe that Homer doesn't actually answer the question wrt "justifying" it, she passes the buck saying that others have approved it.

On the plus side, she does at least admit that she gets paid a lot!

All happy with that response then?

HMRC Is Shite (www.hmrcisshite.com), also available via the domain www.hmrconline.com, is brought to you by www.kenfrost.com "The Living Brand"
Posted by Ken Frost at 09:04