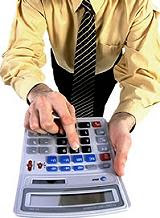 "The Guardian reports that the government is paying up to 10 times more for IT projects than the standard commercial rate.

The public administration select committee (PASC) found ministers were "overly reliant" on a few large suppliers, resulting in the waste of an "obscene amount of public money".

Is HMRC being ripped off?

Well, judge for yourselves:

"The Aspire contract between HMRC and Capgemini covers a 13 year period and was originally valued at £2.8 billion.[49] This contract is a case study of what is wrong with the present procurement culture. Such a large contract is too complex to manage. The assessment of costs and benefits is opaque and it commits too much power and money to a single supplier."

Source Government and IT- "A Recipe For Rip-Offs": Time For A New Approach"

HMRC last month renegotiated Aspire (now worth around £8.5BN) with Capgemini, in line with the government's revised IT sourcing strategy.

My thanks to a loyal reader who pointed me to an article in Information Age, which notes that HMRC has agreed "operational efficiency and cost savings" with Capgemini. Additionally, work that is currently subcontracted to over 240 suppliers by Capgemini may (note that is only "may", not "will") be transferred to direct contracts with HMRC.

The last renegotiation of Aspire in 2009 aimed to save £110M per annum, by scrapping the legacy systems taken on board by the merger of the Revenue and Customs and Excise, and by shutting down a number of data centres.

HMRC Is Shite (www.hmrcisshite.com), also available via the domain www.hmrconline.com, is brought to you by www.kenfrost.com "The Living Brand"
Posted by Ken Frost at 09:23