Tax Does Have To Be Taxing II 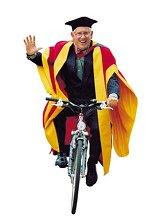 Commiserations to Adam hart-Davis, who has been booted out of any future HMRC advertising campaigns.

It seems that the recent comments by Mr Hart-Davis about wishing that the tax system was simpler, and describing VAT as "absurdly complicated", has not gone down well with HMRC.

Mr Hart-Davis, for good measure, then called for a flat rate tax and said that the merger of the Inland Revenue and Customs & Excise in 2005 was a mistake. His rationale being that the two departments were too large to "slam together".

HMRC hit back and said:

"We will not be using Mr Hart-Davis in any self-assessment advertising campaigns in the future."

I guess they won't be approaching me to front their future campaigns?

HMRC Is Shite (www.hmrcisshite.com) is brought to you by www.kenfrost.com "The Living Brand"
Posted by Ken Frost at 09:34